(iTers News) - ABI Research reports that forked Android or Android Open Source Project (AOSP)-based smartphones grew 20% sequentially from 1Q 2014 to 2Q 2014, compared with overall market growth of  3%. That accounted for 20% of the smartphone market. Certified or a short of OHA, Open Handset Alliance, Android still leads the market with 65%, but it grew 13% sequentially. Android AOSP and OHA combined shipped 278 million smartphones, a staggering 86% share, in 2Q 2014.

“AOSP’s growth is driven by the development of Chinese and Indian handset manufacturers, not only in their domestic markets, but increasingly throughout Asia and beyond,” said Nick Spencer, senior practice director, mobile devices, ABI Research.

“Chinese and Indian vendors accounted for the majority of smartphone shipments for the first time with 51% share. While many of these manufacturers are low cost, some are making inroads in the mid-tier, including Xiaomi and Gionee, hence the growing challenge to Samsung in particular,” added Spencer. 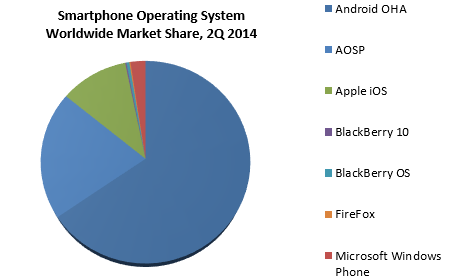 The forked Android, or AOSP is a stripped-down, or purely genuine Andriod OS system that  comes with no Google Mobile Services like Google Play Storem Google Map, and Chrome browser. Rewriting the source code of the AOSP, mobile phone makers can build their  own app stores and browser on top of that. A case in point is Amazon that built the Kindle series of smart phones on the AOSP. As a growing number of low-cost Chinese and Indian smart phone makers are building their smart phones around the AOSP,   ironically, it is now comign as a threat to the dominance of the Android OS system

The scraps remaining for third or fourth place (if you include AOSP) place are few and far between with third placed Microsoft Windows Phone experiencing a near flat quarter with -1% growth year-on-year and a share of 2%.