Tablet PC shipments to slow down in 2014

(iTers News) - According to market research firm NPD DisplaySearch, shipments of notebook PCs in the first quarter of 2014 were better than expected due to the commercial PC refresh cycle and Windows XP migration.

However, shipments of tablet PCs dropped year -on-year to hit 56 million units marking the first quarterly decline on record. Many brands reported weak tablet PC shipment results in Q1 due in part to delayed launches of new products. NPD DisplaySearch has lowered its forecast for tablet PC shipments in 2014 to 285 million.

“Tablet PC demand in 2014 is being affected by falling demand for the 7-inch class in emerging regions and in China, where many local white-box brands have experienced lower-than-expected shipment growth,” said Hisakazu Torii, vice president, smart application research at NPD DisplaySearch.

“Most major brands have recently reduced their business plans for 2014. There is a risk that the replacement cycle for tablet PCs will lengthen beyond the one to two year range unless brands can develop more attractive usage scenarios,” added he.

For the past several years, tablet PCs and smartphones have been the primary growth driver in the smart device category. In 2014, the year-on-year growth rate of tablet PCs will fall to just 14% and by 2017 will slow to single digits. 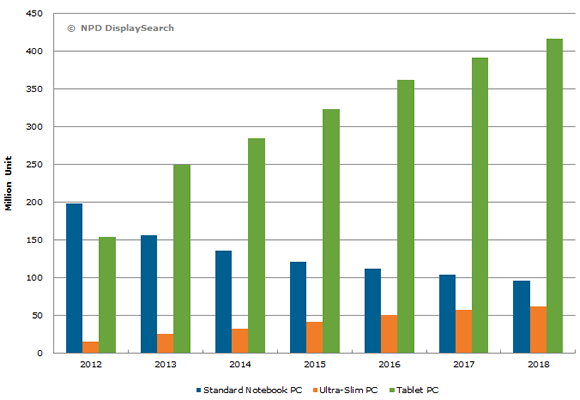 In addition, NPD DisplaySearch expects 11-inch and larger tablets will exceed 10% of the market by 2018. “The increase in screen sizes will help increase tablet PC revenues.” Torii said. 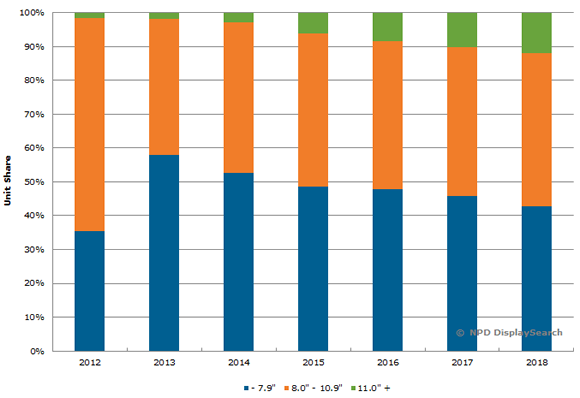