(iTers News) - According to the NPD DisplaySearch Quarterly Smart TV Usage Study, consumers in emerging markets are twice as likely as those in mature markets to purchase an internet-enabled smart TV in the coming 12 months. When asked about their planned TV purchases, 71% of consumers in Brazil, China, and other emerging markets reported they were likely to purchase a smart TV in the next 12 months, compared to just 37% of TV consumers in France, the UK, and other mature markets.

“Features that are key to future smart TV purchases include being able to search for online content, web browsing, and VOD services, as they allow consumers to access entertainment, news, and other online content such as shopping,” said Riddhi Patel, Research Director at NPD DisplaySearch. “Dual-play 3D games and cloud storage were least important to consumers.”

TV brands continue to promote smart TVs, with expanded application stores and video conferencing capabilities; however, consumers in emerging markets do not consider either of these features important for their future smart TV purchases.

For connected TV owners in emerging markets who are not likely to purchase a smart TV in the next 12 months, 25% mentioned that they owned other smart devices that could access the content they wanted. Consumers also cited the high cost as one of the reasons for not planning to purchase a smart TV in the next 12 months. Reasons also varied by country. In Russia, the most cited reason (35%) was the existing ownership of other smart devices. In Indonesia, smart TV pricing was the major purchasing hurdle. In both Turkey and Mexico, consumers did not see the need for a smart TV in connected flat panel TV households, since many of the households already owned one. 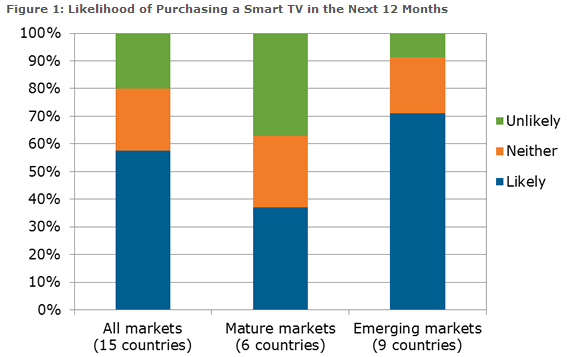