(iTers News) - According to International Data Corporation (IDC),Q1 2014 showed signs of growth as compared to a lack lustre Q4 2014, promising hope for the Ethernet Switch and Router Market in India.

The router market for Q1 2014 in India outpaced the earlier quarters and stood at USD 82.7 million, with 68.2% QoQ  and 40.1% YoY rise as a combination of optimism as well as deferred deals registered by some of the vendors in the market.

The Wireless LAN market in India witnessed a 17.6% increase QoQ and 10.5% YoY during 1Q 2014, according to IDC’s Quarterly APeJ Wireless LAN tracker. The Q1 2014 WLAN India market was pegged at USD 35.9 million. Despite the past trend of seasonal low in the last quarter of a year combined with the noticeable slow-down due to the elections, the numbers above show a relatively positive sentiment and have put the LAN & WLAN markets in India in a strong position for the upcoming quarters.

Enterprises made the largest contribution to the Ethernet Switch and Router market in India, continuing the trend from the last few quarter whereas the service provider segment showed signs of revival with the highest growth rate in the recent quarters.

IDC believes that the wider acceptance of 3rd Platform that represents the increasing popularity of Social Networking, Mobility, Big Data & Analytics, and Cloud among enterprises was the prime reason for the growth and future prospects in the market. 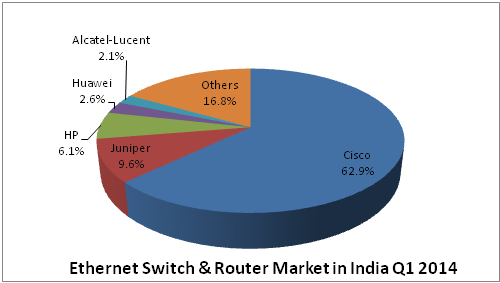 Suman Bisht, Market Analyst, Enterprise Networking, IDC India, says, “The investments in the conventional networking infrastructure will be affected by the highly-revered Software Defined Networking (SDN) and Network Functions Virtualization (NFV) and will evolve with time to give a noticeable revenue stream to vendors. Additionally, the in-house manufacturing of white-label box network devices by the big customers is also a blow to the incumbent networking vendors who are already reeling under margin pressures.”

Gaurav Sharma, Research Manager, Enterprise, IDC India, comments "Inexorable data growth, strong competition, and consumer demands are the major factors driving the growth of network market in India. With market-friendly policies and leapfrog disruptions like LTE rollouts, the market is expected to sail through the tough waters ahead.”