Acer zooms past Samsung as No. 1 supplier of Chromebook in the 2nd Q

(iTers News) - Chromebook shipments reached 1.8 million units in the second quarter of 2014, and Acer held the number one spot in shipments with a 30% market share, surpassing Samsung Electronics for the first time on record , according to WitsView, a subsidiary of Taiwan-based TrendForce. 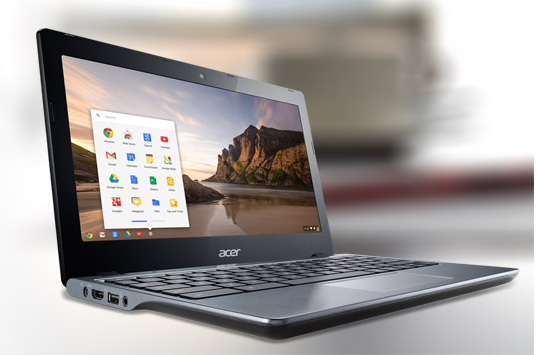 According to WitsView Research Assistant Manager, Caroline Chen, Acer and Samsung were competing neck and neck with one another in terms of shipments during the first half of 2014, both with approximately 900,000. The second half of the year will largely determine which takes the number one spot in Chromebook shipments due to the peak season.

Acer’s 30% market share in the second quarter gave the company a 6pp increase over Samsung. Hewlett-Packard (HP) meanwhile treaded closely with a 21% share to hold the number three spot. Samsung used to be the top competitor in the Chromebook segment since 2013 but saw its spot drop in the second quarter due to high pricing for two new units that were released. Meanwhile, other vendors had competitive pricing and released new units as well, which in turn provided consumers with a wider range of choices. Most notably that the release of Microsoft’s US$249 unit has also decreased the attractiveness of the overall Chromebook market.

Chen added that two major factors for Chromebook sales in the market include pricing and data security for enterprises. Chromebook cloud computing storage is easy to manage for enterprise in terms of data security, but its pricing advantages lost out to Microsoft, who is lowering pricing for certain notebooks from US$249 to US$199 to further dominate in the low-priced notebook segment. Overall, the penetration rate for Chromebooks in 2014 is expected to reach 3-5%.

She wishes to bring valuable market intelligence analysis for WitsView’s clients, specializing in product specification and market movement, with the help of her previous experiences in the panel maker. As a former PM on mid and small-sized panel in Hannstar, she was in charge of collecting external market information, client communication, and internal product planning and coordination. [/sws_toggle1]