(iTers News) - For most of the last decade, microelectromechanical systems, or MEMS  technology spread quickly into high-volume electronic products, accounting for 70% of today’s semiconductor sensor sales, but MEMS has suffered growing pains in the last two years with total device sales declining 1% in 2012 and being flat in 2013 at US$7.0 billion.

Price erosion in MEMS-based sensors—especially accelerometers and gyroscope devices used in smartphones and other portable products—along with slower unit growth have caused this segment to languish.  However, new multi-sensor platforms, wearable systems, and the rush to connect things to the Internet are reigniting sales again, according to IC Insights’ 2014 O-S-D Report—A Market Analysis and Forecast for Optoelectronics, Sensors/Actuators, and Discretes.

In the 2008-2013 period, MEMS-based semiconductor unit growth surged by a CAGR of 23%.  This growth was driven by the introduction of accelerometers and gyro sensors into smartphone handsets for intelligent control and motion-sensing applications for navigation and a range of new uses, such as activity tracking, health monitoring, and hand-gesture interfaces.

Tiny microelectromechanical structures etched and layered into silicon on MEMS semiconductors are used to perform transducer functions for sensing and measurement of changes around devices or instigate physical action from electronic signals.  MEMS is employed in acceleration and yaw sensors (accelerometers and gyroscopes), pressure sensors (including altimeter and microphone chips), and a wide variety of actuators (for inkjet printer nozzles, micro-mirrors in digital projectors and displays, timekeeping oscillators, radio-frequency filters and switches, and “biochips”). 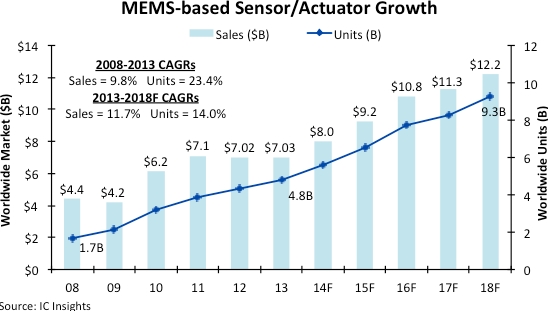 Roller-coaster growth rates in the large-but-fragmented actuators category has held back overall sales in MEMS semiconductors in the last 10 years, but sensors have been more consistent in climbing higher.  For instance, MEMS sensor sales grew by a CAGR of 19.2% between 2008 and 2013 to US$3.8 billion, while actuator revenues rose by an annual average of just 2.8% in the five-year period to US$3.3 billion last year, according to the O-S-D Report.

In the 2013-2018 forecast period, both MEMS sensor and actuator sales are expected to rise by a CAGR of about 12%.  IC Insights expects actuator sales to strengthen and become less volatile as more devices move into high-volume systems and new application concepts finally taking off in the commercial market—such as inexpensive disposable lab-on-chip devices for low-cost drug development, DNA analysis, and infectious disease identification.

The challenge for MEMS sensors will be coming off extremely high growth rates in the past five years, which were mostly concentrated in a few major applications, such as smartphones and interactive video games, along with steady increases in automotive electronics.  MEMS sensor unit shipments surged by a CAGR of 35% between 2008 and 2013, which is more than double 15% annual growth rate expected in the next five years, according to IC Insights’ 2014 O-S-D Report, which forecasts 7.7 billion devices to be sold in 2018 compared to 3.9 billion sensors in 2013.  MEMS sensor sales in 2014 are forecast to grow 16% to US$4.4 billion after increasing just 4% in 2013.

While overall annual unit growth rates are expected to be lower in the next five years, shipments of MEMS-based sensors will be driven by a much wider range of system applications, including more devices in smartphones and automobiles, but also new uses in consumer electronics, portable products, wearable systems, handheld test and instrument equipment, home automation, factory gear, and personal medical devices.  The spread of MEMS-based sensors and actuators into a broader range of new applications will help keep ASPs from eroding in the coming years because higher-priced designs will become more specialized, and thus, dollar sales growth is expected to be stronger in the years ahead despite the easing of unit volume increases in the 2013-2018 period.