(iTers News) - Although PV manufacturers across the world are keeping their production lines humming to meet a rush of orders riding on the strong demand in the U.K. and Japan in first quarter, pricing in the PV industry is likely to drop in the following quarter, according to EnergyTrend, a subsidiary of Taiwan-based market intelligence firm TrendForce.

The research organization blamed ongoing countervailing duty, or CVD and anti-dumping duty  issues between U.S., China, and Taiwan for the price erosion,  pointing  out that  PV shipments were mostly focused on the U.S. market, while shipments have eased in other markets.

Solar PV supply chains are starting to see demand in China whither, while demand in the U.S. and Japan remain stable, said EnergyTrend Research Manager Jason Huang. As such trends occur, solar supply chains are nevertheless expected to increase production capacity in the second half of 2014, which means Chinese market demands will play a major role in terms of global solar PV pricing and volume. If demands in China remain at around 10-12GW then manufacturers in the PV supply chain can balance out orders in conjunction with their new capacity. However, if Chinese market demands are lower than expected coupled with uncertainties surrounding CVD and AD issues, the PV market still risks oversupply and hence declined prices. 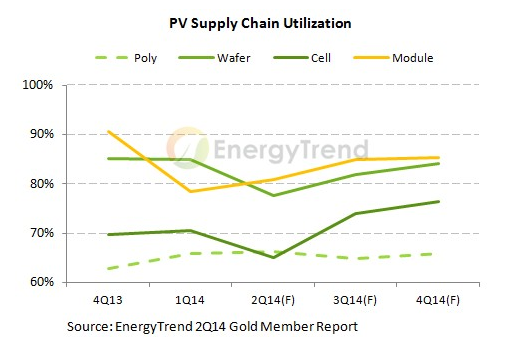 Meanwhile, recent EnergyTrend statistics show first-tier polysilicon makers are currently running at full capacity and polysilicon pricing is on the rise. Evaluations of manufacturers expansion plans after 2015 show manufacturers that previously halted productions returning to the market. In the short term, these manufacturers will be focused on manufacturing quality so utilization rates will remain low and have limited effect on market demands.

Silicon wafer makers on the other hand saw strong demands in the first quarter of 2014, and thus this led to steady PV shipments and pricing. Meanwhile, second-tier manufacturers were able to maintain high utilization rates. However, as demands weaken in 2Q14, second-tier vendors are likely to return to more conservative outlooks, and production strategies after clearing out inventory.

Because of the postponement on the US-China preliminary AD rulings, solar cell makers in Taiwan could maintain high utilization rates till mid-June this year. On the other hand, Chinese manufacturers saw utilization rates drop due to the financing pressures caused by excess inventory in the U.S. If solar demand picks up in the second half of the year, however, manufacturers might add more than 4GW solar cell production capacity onto the market, said Huang.

Other manufacturers outside of China and Taiwan have also scaled up production capacity in Southeast Asia, Korea, Japan and other regions to fill in the demand gap left by Chinese manufacturers because of trade wars against China carried out by Europe, U.S., India and Australia.

Education: Master's degree,University of Arizona, Master of Science in Management with a Concentration in Finance (MMF)