(iTers News) – Shipments of x86-architecture servers to Chinese markets in the first quarter totaled 350,000 units, growing 22.9% year-on-year. Meanwhile, the factory revenue of x86 servers in the same quarter reached US$1.07 billion, growing by 24.5% over the same period last year, according to market research firm IDC.

"China's x86 server market has seen steady growth, driven by the continuous investment of Internet companies in infrastructure as well as the emerging demands of the traditional IT enterprises for local products. The gap between domestic vendors and leading MNC vendors is narrowing down.” says Eric Peng, Research Manager, Enterprise System Research, IDC China. 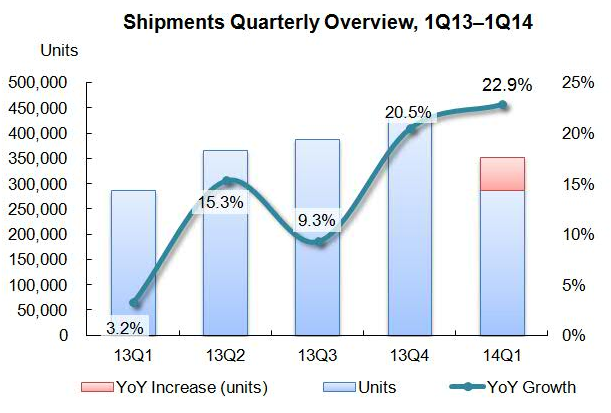 The 3rd platform technologies such as cloud, social, mobility and big data/analytics have lead to development of scale-out architectures, fueling the growth of high-density servers and the delivery of whole rack solution.

In the market of 2nd platform technologies, demands for virtualization workload consolidation and migration of low end Unix towards x86 servers platform have continued to drive the growth of the x86 servers market.

The competition in the server market has evolved beyond the product itself as the users in China market are maturing. Channel coverage, partner alliance, understanding of users’ demands, as well as the capability to provide users with an integrated end-to-end solutions have emerged as major differentiators in the future.

Dell, HP and IBM still have an upper hand on these aspects. In terms of shipment, Dell tops China x86 server market with a share of 20.2%. Inspur scored an year-on-year  growth of 117% in the first quarter, thanks to its major wins with Internet companies.

Chinese domestic vendors Huawei, Lenovo, Inspur, and Sugon together with such international brands as HP and IBM form the 2nd tier that each accounts for a share between 8%-15%.

2014 is a key year for China to execute the 12th Five-Year Plan. On the industrial market side, the demands of government, telecommunications, electricity and financial sectors have shown a significant rebound.

Taxation, social insurance, department of finance, public security and defense department all invest large amount of resources to update the infrastructure. The 12th Golden Project driven by government sector has led the growth. In order to satisfy the demands of Chinese market for local products, Chinese vendors represented by Huawei, Inspur, Lenovo and Sugon have been seeking breakthroughs in the above-mentioned sectors.

In the fast-growing internet sector, domestic vendors, compared with their international counterparts, are more focused on winning the mega deal from hyper-scale customers, so as to seize desired market shares in the increasingly fierce competition in Internet and Cloud service provider markets. 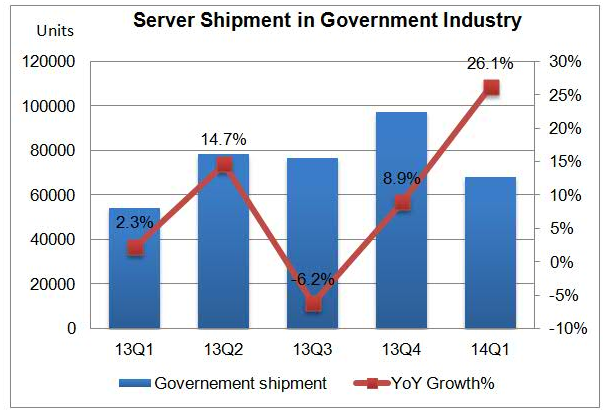 “The huge x86 server market in China has even more opportunities to tap. The 3rd Platform technologies have accelerated the market growth. Server vendors should pay special attention in the period of change to keeping the balance of market share and profit margin with specific strategies for 2nd platform and 3rd platform, to ensure the sound growth on each niche market,” says Eric Peng, Research Manager, Enterprise System-Research, IDC China.