(iTers News) - Larger displays with higher resolutions are leading growth in the global professional graphics display category. According to the new NPD DisplaySearch Specialty Displays Report, shipments are forecast to grow at a compound annual growth rate (CAGR) of more than 3% through 2017. Dell was the leading global brand for professional graphics displays based on shipments in 2013, with 34% of the market; however, on a revenue basis, Eizo led the category at US$22 million. The ASP of Eizo displays last year was US$1,858 compared to US$756 for Dell.

“While worldwide shipment volumes are much lower for professional graphics displays than for standard desktop IT displays, the profit potential for the display brands is much higher,” said Todd Fender, senior analyst of professional and commercial displays at NPD DisplaySearch. “Professional displays do not have to compete as a commodity product, where price is more important than performance.”

“Average screen sizes are trending larger in many markets, including the professional graphics market, due to many factors, such as increased availability and lower price points,” according to Fender. “Higher resolutions over 3 megapixels are also becoming more commonplace, as LCD panel manufacturers shift production to these higher resolution panels.” 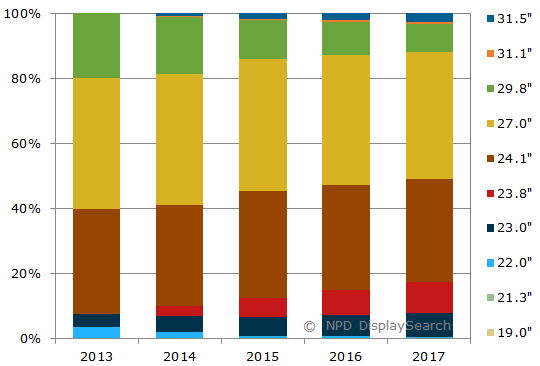