(iTers News) - The market for wearable devices, like activity trackers, notifier bands, smart watches, and head-mounted displays, first took off in 2013, and shipments would grow as high as 48 million units in 2013, mainly powered by market momentum, and almost double to 91 million units in 2015. However, according to market research firm NPD DisplaySearch, the market is expected to slow down starting in 2016, as consumers will increasingly disillusoned from the  initial hype.

“We expect that the dynamics of the wearables market will be similar to DVD, LCD TV, smartphones, and other digital consumer markets with commoditized hardware,” said  Paul Gray, director of European TV research for NPD DisplaySearch. “The arrival of Samsung, LGE, and other large, cost-efficient manufacturers to the wearables market would bring prices and margins down.” 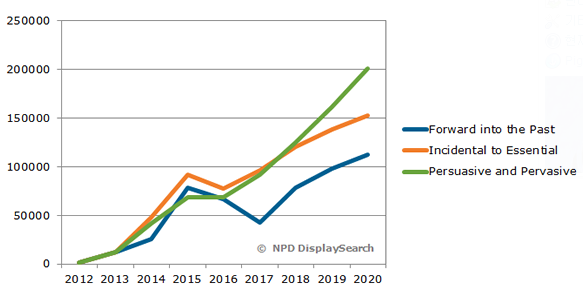 Given the uncertainties in consumer adoption, retention, and product development, NPD DisplaySearch came up with three market growth scenarios.

In this scenario, China is expected to dominate the market, due to its huge market size and strong smartphone uptake. However, a strong fashion effect would cause a surge and then backlash in China in 2017. North America and Europe would experience a slower decline than China in 2017. “Chinese shipments would then accelerate later in 2017, as unbranded and local suppliers gain share by selling wearable devices at low prices,” Gray said.

In the second forecast scenario, what starts out as a casual purchase becomes essential due to the intrinsic usefulness of wearable devices. Like Apple’s iTunes, consumers become locked-in and loyal to combinations of devices and services.

In this scenario, China again dominates demand for the same reasons. However, in this scenario a more limited fashion effect causes a surge and then decline in China in 2016.The decline is limited in North America and Europe by the dominance of a few brands that can maintain sales through bundling strategies. China accelerates in the later part of the forecast, as unbranded and local suppliers gain share. Strong branded offerings cause a market surge in all regions, especially North America, where adoption is locked in. “Driven by an early shrinkage in 2016, consolidation is rapid, allowing a small number of brands to strengthen their positions,” Gray noted.

The persuasive and pervasive forecast scenario reveals a more positive shipment outcome than the Incidental to Essential scenario in that the health benefits of wearable devices become significant, while body sensing becomes a critical part of everyday life, triggering medical intervention, providing security and identification, and even daily living assistance. Private and public healthcare providers recommend wearable technologies to their patients.

While China again dominates demand in the longer term, it would be relatively slow to grow. In this scenario the fashion effect would again be minimal, as the primary driver in the market is healthcare applications. The market is forecast to plateau in 2016 but does not decline overall. North America is the earliest adopter of wearables, reinforced by social networking. Chinese market growth would accelerate again in 2017, as local suppliers gain share at lower prices. “Increased concern about healthy living in China and similar concerns in Europe could lead healthcare providers to recommend activity-tracker devices to their patients,” Gray said.