(iTers News) - Despite a few false starts, television brands remain committed to the success of active matrix organic light emitting diode (AMOLED) sets, with the new impetus evident at CES expected to cause shipments to rise to more than 10 million units in 2018, according to IHS Technology.

Global unit shipments of AMOLED television panels are expected to amount to about 50,000 this year, as the sets remain very expensive and only one manufacturer—LG Displays—is expected to ship large volumes of panels in 2014. However, several brands demonstrated a range of compelling AMOLED sets at CES. As the AMOLED display suppliers resolve their manufacturing challenges, and the brands enter higher-volume production, AMOLED TV panel shipments will rise to 700,000 in 2015, to 2.2 million in 2016 and to 5.1 million in 2017. 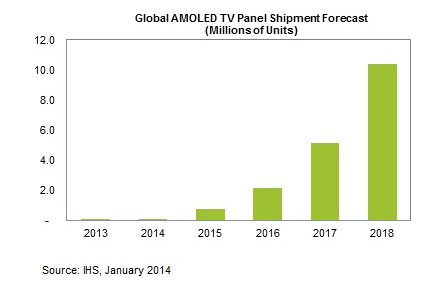 “AMOLED televisions were on center stage at CES, led by LG Electronics, Samsung and Panasonic showing a variety of new sets, including models with a range of screen sizes, ultra high definition (UHD) resolution and curved and even bendable displays,” said Vinita Jakhanwal, director of mobile and emerging displays and technology at IHS. “The high profile of the products and large number of sets at CES indicates that television brands remain committed to promoting AMOLED technology. Although previous AMOLED TV initiatives have been stymied by production issues, these are expected to be overcome and sets are expected to enter high-volume production in the coming years.”

LG Electronics at CES in 2013 launched the world’s first 55-inch Curved Full high definition (HD) AMOLED TV. This year at CES, the company made another first, with a 77-inch bendable UHD AMOLED TV. Users can adjust the bending radius of 5,000mm with a remote controller. LG Electronics said it has conducted tens of thousands of tests for verifying safety. 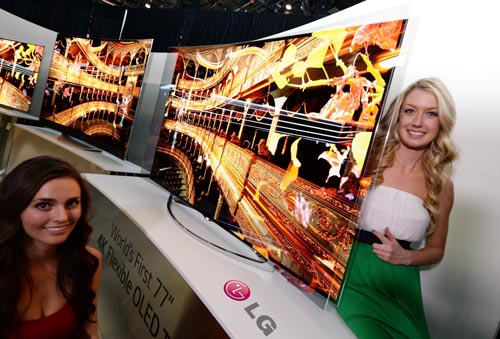 LG Electronics is using a WOLED, or white-OLED, panel based on oxide TFT technology from LG Display. The company currently is running 8,000 sheets per month on its eight-generation WOLED fab. LG plans to expand production to 26,000 sheets per month.

Samsung Electronics at CES showed 55-inch curved Full HD OLED TV with an adjustable radius via the remote control. The company is using an RGB separated AMOLED panel based on low-temperature polysilicon (LTPS) TFT from Samsung Display, which is running 10,000 sheets per month at an eight-generation fab.

However, Samsung Electronics did not show 60- or 70-inch AMOLED televisions. This indicates Samsung maybe experiencing difficulties in developing larger sized RGB separated AMOLED panel based on LTPS TFT. On the other hand, Samsung announced an 85-inch bendable UHD LCD TV, which can be adjusted the bending radius of 4,200mm with a remote controller. This indicates that bendable TV technology is not restricted to the OLED segment.

Panasonic announced five versions of its 55-inch curved UHD OLED TV, and it exhibited them each with different bending points and radiuses. Panasonic has developed its AMOLED TV panel with Oxide TFT with Sony and AUO. However, Panasonic this year announced that it stopped cooperating with Sony, and will develop AMOLED TV panels by itself.

A few Chinese TV makers—including TCL, Hisense and Changhong—showed their own 55-inch AMOLED TVs at CES, and that they announced that they will begin selling these sets soon.

These companies source their AMOLED TV panels from LG Display. However, they did not show curved or UHD OLED TVs like LG, Samsung and Panasonic.

LG announced it will launch 55- , 65-, and 77-inch Curved UHD OLED TV in 2014. The company also said it would strengthen its dominance in the AMOLED TV market by expanding its high-end distribution channel and local VVIP marketing activity. Thus, AMOLED TV panel market would split into two distinct segments in 2014: a high-end portion with curved and UHD OLED panels and a more mass market with flat and full HD AMOLED panels.