(iTers News) – Worldwide smart connected devices are forecast to grow 15.6% year over year in 2014, reaching close to 1.8 billion devices according to the International Data Corporation (IDC) Worldwide Quarterly Smart Connected Devices Tracker. Smartphone growth is expected to lead the charge as PC and tablet plus 2-in-1 forecasts have been lowered in light of a weak first quarter. By 2018, IDC estimates shipments will grow to 2.4 billion units.

"Apple's iOS-ification of Mac OS, and Microsoft's implementation of Modern UI throughout different form factors are clear indicators that we're living in a mobile-first world," said Jitesh Ubrani, Research Analyst, Worldwide Quarterly Tablet Tracker. "The PC will be the new accessory to mobile as smartphones become the first and primary computing device for many." IDC expects smartphone shipments to outpace total PC shipments by more than 6 to 1 in 2018.

The smartphone installed base is quickly approaching two billion units, and vendors are scrambling to find the next two billion users in new markets. As such, IDC is forecasting strong double-digit growth in the low-cost Android smartphone segment that is driving much of the growth in emerging countries such as China, India, and Brazil. Meanwhile, mature markets such as the United States and Western Europe are slowing to single-digit growth rates as the installed base swells.

"Low-cost Android smartphones will drive much of the SCD shipment growth in coming years," said Tom Mainelli, Program Vice President for IDC's Devices and Displays group. "The influx of inexpensive phones will drive the SCD average selling price bands downward, with the sub-US$200 band increasing from 33% of total shipments in 2013 to greater than 43% in 2018, while devices that cost more than US$500 are forecast to shrink from 33% of total device shipments to 21.1%." 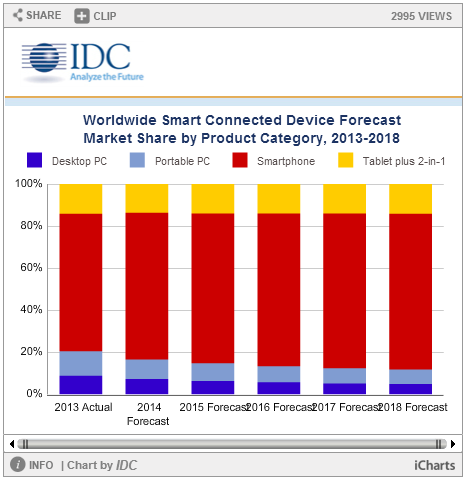