(iTers News) - The world market for consumer medical devices will enjoy steady growth in the years ahead as aging populations climb in number and diseases exacting their toll require observation and supervision, according to a new report from IHS Inc., a leading global source of critical information and insight.

Global revenue for consumer medical devices is set to reach US$8.2 billion by year-end, up a solid 4% from US$7.9 billion in 2012. Revenue expansion for the next few years will range from 5 to 9%, with industry takings by 2017 amounting to US$10.6 billion, as shown in the attached figure. The majority of revenue will stem from hearing aids because of their higher average selling prices (ASP), but diagnostic devices like blood glucose meters and blood pressure monitors will also play a part. 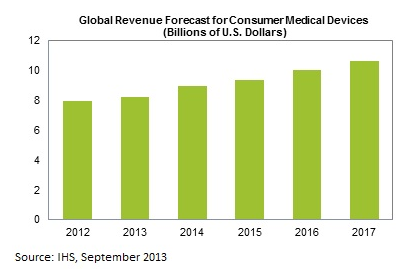 “One important reason for the consistent rise in revenue over the years of consumer medical devices is that the worldwide population of those aged 65 and above will continue to grow over time, making up an increasingly larger percentage,” said Roeen Roashan, analyst for consumer medical devices and digital health. “As a result, health monitoring will increase. And while evident in all regions, the phenomenon will be particularly apparent in Europe and Asia.”

A second reason for the growth of the market stems from the continuing peril imposed by cardiovascular diseases such as hypertension, responsible for more than 30% of annual deaths, Roashan noted. Lifestyle diseases are at their highest prevalence given the current state of people diagnosed with high blood pressure, diabetes, and obesity. In particular, developing countries such as China, India, Russia, and the sub-Saharan African region are experiencing high growth in hypertension incidence, taking place because of a richer diet borne out of rising discretionary income.

A third reason why consumer medical devices can expect ongoing firm prospects is due to government initiatives in preventive care. Such efforts have had the effect of increasing awareness among consumers of the benefits to be obtained from health monitoring, and prohibitive healthcare costs have only added to the urgency of the matter.

Personal care devices such as activity monitors, body composition analyzers and heart-rate monitors are among the fastest-growing consumer medical devices today, given the rising number of fitness-conscious consumers. Asia-Pacific is the epicenter of growth, but the Americas and the collective Europe-Middle East-Africa (EMEA) regions are also prominent centers of market activity. Among countries, Denmark and the U.K. have been especially successful in implementing telehealth, or the remote monitoring of health conditions via monitors and compatible devices.

An important contributor to the market is the blood pressure monitor device, with revenue this year of some US$838 million—or one-tenth of the overall takings projected in 2013 for consumer medical devices. And like its parent market, the blood pressure monitor industry will enjoy stable growth in the years to come, with 2017 revenue forecast to reach more than US$963 million.