(iTers News) - Apple may be the most influential technology company in the world, but even its formidable status may not help as it tries to out-innovate Samsung, its primary competitor. That’s because any major innovation would likely demand greater memory capabilities—and Apple has no memory making capabilities, while Samsung is the memory market leader, according to a new DRAM Dynamics Brief from IHS Inc., a leading global source of critical information and insight.

Samsung is the leading supplier of both dynamic random access memory (DRAM) as well as NAND flash, both of which are essential components in nearly all of today’s consumer electronics, including smartphones and tablets where Apple enjoys great success, via its best-selling iPhone and iPad devices.

In the first quarter, Samsung’s revenue of US$4.6 billion accounted for 36% of the total DRAM and NAND memory market of US$12.8 billion. To put into perspective Samsung’s gigantic heft, its output exceeded that of No. 2 SK Hynix and No. 3 Toshiba combined. Samsung was also bigger than the accumulated totals of Toshiba, No. 4 Micron Technology and fifth-ranked Elpida Memory, as presented in the attached figure. 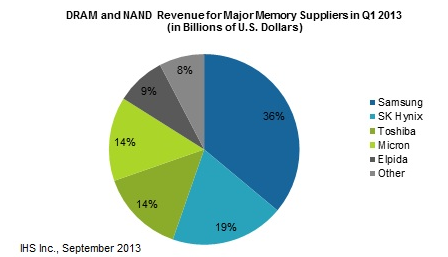 “While the argument can be made that Apple sees some benefits by not sharing critical prototype design information with Samsung, the fact remains that Apple limits its options by not doing business with Samsung, which places Apple at a disadvantage,” said Mike Howard, senior principal analyst, DRAM & Memory, for IHS. “The difficulties presented by this challenge become even more acute considering that the memory industry continues to consolidate, especially in DRAM. The recent closing of Micron’s acquisition of bankrupt Elpida means there are now just three major DRAM developers and four NAND developers left. As Apple’s memory suppliers get bigger because of consolidation, they are likely to gain more bargaining leverage. This is a trend all memory buyers will face, and Apple— even with its heft—is not exempt.”

A matter of custom

Another obstacle for Apple could be that its memory suppliers are reluctant to develop custom products for Apple. Custom parts are risky, and Apple’s aggressive procurement tactics—negotiating by offering to buy at some of the lowest pricing—begets no love from the industry. Without custom products, Apple is forced to use off-the-shelf products that make innovation and differentiation more difficult.

But perhaps the most significant risk for Apple is that Samsung has complete control over its memory future. The South Korean electronics giant controls all of the major components that go into a smartphone or a tablet, such as the screen, the applications processor and the memory. Moreover, Samsung’s robust smartphone market share means it enjoys the requisite demand for designing and building fully custom products that it may choose not to make available to the market at large.

Apple, in contrast, has no such powers at its disposal, and remains at the mercy of its suppliers. One reason Apple has multiple sources for memory components is precisely because it can ill afford to be dependent on any single provider.

Apple’s options to address its memory challenge fall roughly into one of three categories: greenfield, partnership or acquisition. In effect, this means it could buy a memory design company to develop its own custom memory products; it can partner with memory companies; or it can acquire a large existing memory producer.

For the last option, Samsung is clearly not a candidate, while Toshiba and SanDisk seem unlikely because they only make NAND and are already in a partnership. SK Hynix has the appropriate product mix, but national concerns would likely make the deal difficult to swallow for South Koreans.

The only U.S.-based memory producer, Micron, could be a logical candidate. However, Apple’s requirements would strain its capabilities severely—unless the additional capacity brought by Micron’s purchase of Elpida were included, which may then give it too much excess capacity if solely devoted to Apple’s concerns.

All told, Apple faces significant memory challenges down the road, IHS believes. And while numerous paths are available for the maker to strengthen its handicap, it’s impossible to overlook the importance of memory as a critical component for years to come in the devices that Apple makes.

To this end, a competitive strategy in memory would go a long way in helping the company reinforce its status the electronic industry’s leading innovator.