(iTers News) - The size of the Middle East and Africa (MEA) tablet market exceeded the region's portable PC market for the first time in the second quarter of 2013, according to the latest results from International Data Corporation (IDC). The premier global market intelligence and advisory firm for the information technology and telecommunications markets today announced that tablet shipments for the quarter were up an incredible 208% year on year, reaching a total of 2.79 million units.

The Android operating system was the major contributor to this massive growth, with 2 million such devices shipped during Q2 2013. The uptake of Windows OS was rather slow during the quarter, primarily as a result of vendors shipping more Android-based tablets in order to gain market share in the region.

"The launch of the iPad mini could not prevent iOS from rapidly losing share to Android devices, with cost being a key factor in consumers' choice of tablets," says Victoria Mendes, a research analyst for personal computing, systems, and infrastructure solutions at IDC Middle East, Africa, and Turkey. "However, Apple's new product launch, which is expected before the end of this year, will defnitely spur some growth for the vendor in the region."

While Apple's shipment total of 682,000 units for the quarter was lower than expected, the vendor maintained its top position in the rankings, followed very closely by Samsung, which shipped a total of 627,000 units. Lenovo, though far behind, entered the market in third place, shipping 140,000 units. Lenovo, together with other Far-Eastern vendors like Asus, which took fourth place with a total of 107,000 units, and Acer, which grabbed the remaining top-five slot, seem geared up to increase their market shares given the extremely competitive prices they have entered the market with.

"The growing cannibalization of PC demand by tablets has caused several multinational PC vendors to divert a larger proportion of their overall focus onto their tablet ranges," says Fouad Charakla, research manager for personal computing, systems, and infrastructure solutions at IDC Middle East, Africa, and Turkey. "This development has enhanced the growth momentum of tablets in the region."

The corporate segment will continue to grow steadily throughout the forecast period, experiencing a slight spike in 2014 owing to the Fatih project in Turkey, where one million units are expected to materialize. Education remains the main focus area for vendors in the commercial space, with various initiatives being launched across the region.

"The tablet market will continue to be driven by low-cost tablets, be they from the newer Far-Eastern entrants or even from the more established multinational brands," says Mendes. "The main focus of every vendor now is to secure its position in the market by grabbing the biggest share possible from the two tablet giants of Apple and Samsung." 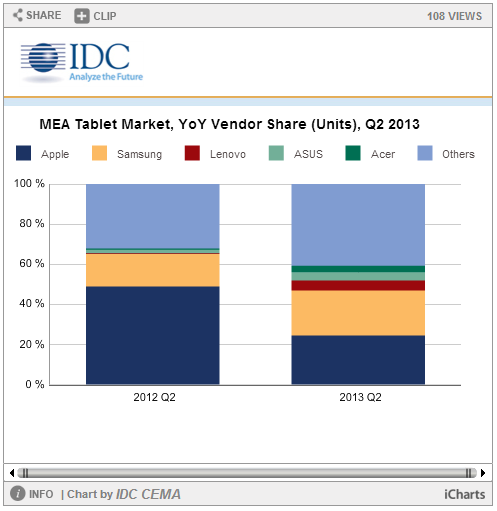